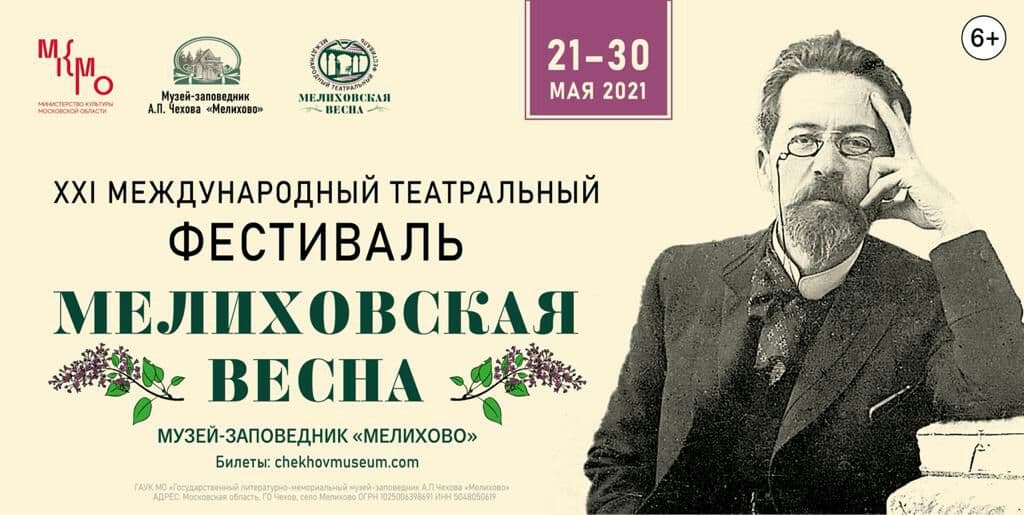 This year Anton Chekhov Museum-Reserve "Melikhovo" will host the XXI International Festival "Melikhovskaya Vesna" (“Spring in Melikhovo”) from May 21 to 30, 2021. Every year, this major theater forum brings together Russian and foreign theaters to show all the variety of stage versions of the works by Anton Chekhov. In 2021, the festival guide will feature more than 20 performances by theater groups from 5 countries.

As you know, the name of Anton Pavlovich Chekhov is closely associated with the Moscow region. In the village of Melikhovo near Moscow, he lived and wrote more than 40 of his literary works and two plays. The concept of the festival "Melikhovskaya Vesna", which was originated in the writer's estate at the end of the XX century, – is based on presenting performances after the works by Chekhov or about Chekhov. The distinctive feature of the festival is that in addition to classical productions, its program includes chamber performances, large-scale stagings, and avant-garde versions. Every year, the festival is visited by several thousand spectators, primarily residents of the Moscow region and Moscow.

The festival is also notable for its traditionally wide geography of participants. This year, we host theaters from Spain, Israel, Poland, Ukraine, as well as from Russian cities: Moscow, Lipetsk, Vologda, Tyumen, Nizhnevartovsk and a number of city districts of the Moscow Region will be included in the "Melikhovskaya Vesna" poster.

Elena Kharlamova, Minister of Culture of the Moscow Region:

"For the past 20 years, 150 theaters from 22 countries have participated in the International Theater Festival "Melikhovskaya Vesna". It has become a landmark event for theatrical Russia and a favorite festival for residents of the Moscow region. This year, it will be the premiere performance of "Uncle Vanya" to open the festival. It is staged by the Moscow Provincial Theater under the direction of People's Artist of Russia Sergey Bezrukov.

For the first time, along with the best Russian and foreign theaters, talented theater groups from Sergiev Posad, Serpukhov, and Mytishchi will also join the festival. I show my appreciation both to the participants and the audience of the festival for their loyalty and hope, because last year-the anniversary year for Chekhov - our spring theater forum failed to take place first-ever. I am sure that at the "Melikhovskaya Vesna-2021" we will again feel a wide range of bright and sincere emotions, and see classic and innovative productions that will open up a new Chekhov for all of us."

This year's festival performances will be held at three main venues – the Anton Chekhov Museum-Reserve "Melikhovo", the Druzhba Cultural Center (Chekhov), and the Serpukhov Music and Drama Theater. In total, the festival will host more than 25 events – performances, topic-based meetings, and evenings with celebrities.

The grand opening of the festival will take place on May 21 as part of the All-Russian action "Night of Museums" in the Anton Chekhov Museum-Reserve "Melikhovo”.